http://tinyurl.com/a-tale-best-untold (This was originally posted to Propnomicon.)

Barry John: "The public may never know the terror that lurks in the shadowy depths."

If they're lucky, and if their guardians stay true to the grim task ahead.
It's the terrible truths that must be suppressed, after all, not the merely nasty myths.
One can endure and recover from being made to perceive and even believe a horrible lie. One can awaken or be awakened from such a nightmare. Truth can be a remedy to such a falsehood.
"Oh, that was just a movie, those were just actors with makeup, everyone's alive and making other films now, here are their latest projects, see?"
Yet other tales must never be told in the first place, because they cannot be taken back, retracted, recanted, disproved. Once seen, they cannot be unseen nor waved away by other evidence.
Their deepest horror is simply that they are not at all fictional; they have only thus far been not known... but once learned, they cannot be forgotten, to the learner's dismay and misery. There is no Lethe in this lifetime.
I could tell people why I shake, tremble, and am brought to tears — not of fear, my friends, but of rage, shame, and a desire to tear down the pillars of society, to scream at innocent parents to grab their children and run for safety, and to tear a friendly mask away that no-one has dared look behind for some two thousand years — but they would not want to hear me. What would it gain them? The same anguish I have, no more. Certainly no hope of social esteem. One would be thought mad if one spoke of it in public. So I do my best to tamp this knowledge down. I see, I know, it flickers at the back of my mind, I say nothing, I turn away. Thus I keep my own mask on, watching the older and darker mask being maintained.
The thing is, you seekers after darkness here probably know all the clues already, so there's nothing left to doubt. All it takes is putting the pieces together:
Who'd expect, after all the real live human children sacrificed to Ba'al Hammon, that his modern counterpart Santa is thought of as a kind innocent figure, who loves children?
Just like Cthulhu, as the old song says:

... Whether boiled or baked or fried,
With some french fries on the side,
[Cthulhu/Santa] loves the little children of the world! 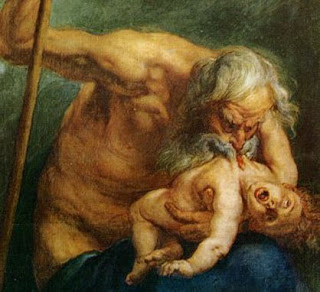 ObMythos: For lack of space in the original Propnomicon comment, I omitted one little footnote about Santa/Saturn's Carthaginian counterpart Ba'al Hammon:
He was also identified with Dagon.
Not Lovecraft's Ponapean or Innsmouthean Dagon, perhaps, but the Middle-Eastern original that inspired him.
Consider the possibility that HPL's fantasy of degenerate New Englanders reviving a sacrificial Dagon cult was his satire on a horrid reality too enormous to bear direct and literal comment: an entire nation, an entire Western culture, sustaining for centuries the symbolism of a child-sacrificial Dagon/Ba'al-Hammon/Saturn cult, under the pretense of it being a benign Christian custom. No-one (save briefly the Puritans) dares speak out against it; it's too well socially entrenched, and will be fiercely defended.
No little "fishy" or "lizard" pendants here, though; the cult's denoted by happy jolly kitschy red-cheeked white-bearded laughing fat old men's faces in white-fur-trimmed red conical caps, all molded in plastic, posted everywhere, over every retail store and your neighbors' front doors.
What? Not yours too? Why, you heretic, you heathen! Repent, convert, or die!


The Bloody-Robed Elder God  [excerpt]:
"Kringle!"
Henry Armitage's voice blew across the windswept rooftop of the Manhattan Macy's building on this late December midnight, down the red carpet incongruously placed from the stairway-top access door to the ornamented throne even more incongruously placed by the roof's edge.
The obscenely jolly and roly-poly red-clad figure seated there belched loudly, and casually brushed the terrified toddler from atop its crimson knees to let him huddle sobbing alone next to the throne. Beside and beneath its smiling rosy lips, its white beard constricted into cords, dreadlocks, and finally tentacles, pulling right and left like a curtain to reveal its true mouth below, vertical and fanged, gnashing the words: "Come forward; a larger meal would please me more."
Armitage hadn't waited for the invitation. Bearing the sign of the Unconquered Sun in his fist, he marched down the carpet, denouncing: "Dagon! Ba'al Hammon! Saturn! Devourer of Children! You have had your last meal in this place! You have no more allies here! Go!"
The thing on the throne tilted its head at the sound of an echoing boom from over the other edge of the roof, and its belly... no, it is better not to describe how its belly moved. But its voice could be said to have expressed some form of humor: "No more allies? But here come my allies now, even sooner than expected."
Quickly, all around them, came the pitter-patter of little hooves... and antlers... and skulls... and other body parts....
As the thing on the throne looked about in puzzlement and growing shock, another man (darkly clad in fedora and mackintosh, leaving only his nosetip illuminated by his cigarette) emerged from the rooftop shadows to exchange greetings with the thing's challenger:
"Hello, Armitage."
"Hello, Pearson." *
"Nitro?"
"Dynamite. Stabler."
"Took them all out pretty fast."
"They shouldn't have let me join in all their silly games." 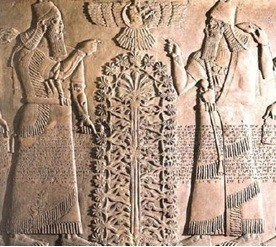 According to the ancient Babylonians, Semiramis (who was believed to be both Nimrod's mother and wife – also known as Astarte, Asherah, Ashtoreth, Isis, Ishtar and Easter) made the claim that after Nimrod died, an evergreen tree sprang up overnight from a dead tree stump. Semiramis claimed that Nimrod visited the evergreen tree and left gifts each year on the anniversary of his birth (December 25th).*

1 Kings 14:23: “For they also built for themselves high places and sacred pillars and Asherim on every high hill and beneath every luxuriant tree.”

Jeremiah 10:3-5: “For the customs of the peoples are vanity. A tree from the forest is cut down and worked with an axe by the hands of a craftsman. They decorate it with silver and gold; they fasten it with hammer and nails so that it cannot move. Their idols are like scarecrows in a cucumber field, and they cannot speak; they have to be carried, for they cannot walk. Do not be afraid of them, for they cannot do evil, neither is it in them to do good.”

Thus judiciously consider the very authoritative words of Rev. Francis Xavier Weiser, S.J., in 1952's The [Catholic] Christmas Book: “The Christ [sic] tree is completely Christian in origin, and historians have never been able to connect it in any way with ancient Germanic or Asiatic mythology.” [emphasis added]
Alas, no Bible verses can be cited in support of this “completely Christian” custom. However, Father Weiser notes, “in the fifteenth century the custom developed of decorating the Paradise tree, already bearing apples,” like evergreen trees everywhere, “with small white wafers representing the Holy Eucharist” — which, being transubstantiated, is the very body of Christ and to be venerated as such, hence his use of the term “Christ tree”. But this effective veneration of the tree as divine (i.e. as Christ) is precisely what makes it idolatry.
Posted by Raven at 9:39 PM

Email ThisBlogThis!Share to TwitterShare to FacebookShare to Pinterest
Labels: lore